Catching tail in the Cape is an art on its own, especially when targeting fish on spinning outfits.

In Cape Town, I prefer a heavier outfit because we are taxed by seals when fishing either at Cape Point or around the Islands from Robben to Dassen. Using the heavier outfit allows the angler to add pressure on the fish to land him prior to the “taxman” taking your catch as well as landing the fish faster on the deck so that you can get the second castaway before the shoal disappears to the abyss. What I find that what works well in the Cape waters when spinning for tail are the Old Cape Secret 70, Anchovie 40, Couta and keel spoons.

The Secret 70 and Anchovie 40 comes into a class of their own when the yellowtail is smashing baitfish and are in a feeding frenzy.

The Couta spoon is generally a great all-round lure for fast and slow retrieve when the fish are present but not feeding and suffering from lockjaw.

The Keel spoon works well on a slow retrieve, hanging in the strike zone for a longer period when the fish aren’t on a feeding frenzy.

The hook sizes are very important when rigging your spoons as I found that using a 4/0 VMC treble sticks 9 times out of. When releasing fish I prefer using a single 6/0 Gamakatsu Octopus or Taman hook as it makes it easier to release the fish without damage.

Catching tail on the troll can be time-consuming and eventful at the same time, but when the bite is on, all hell can break loose on deck landing multiple fish at once while holding the shoal close to your vessel. Trolling however can also have a negative effect when searching for the feeding shoals, as it becomes monotonous and boring and dents the moral, and petrol consumption.

Lures that I find affective while trolling are: Rapala Pink Skad, Magnum 20 and 30, Rapala SFC (sliver flash chartreuse) as well as the Halco Limrick 190 DD.

On this particular day, the bite was extremely slow, so I changed the lure to a keel spoon which allowed me to hang in the strike zone a bit longer. After my second cast at the shoal, it was game on, landing two nice size fish over the 5-kilo mark. 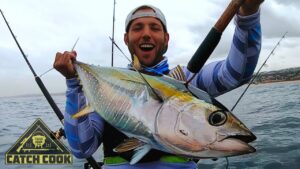 Top Video of the Month

TOP VIDEO OF THE MONTH The winner of our R10