The Kraal Backpackers in the Transkei – Mpande Beach

As usual I left my new year’s arrangements to the last minute.

As usual I left my new year’s arrangements to the last minute.  Thank goodness my good friend Dillon the owner of The Kraal Backpackers, who has known me since I was in nappies, was able to find me a place to pitch my tent, at his fully booked backpackers. The Kraal Backpackers is paradise in my backyard which is the legendary Wild Coast.

I have been holidaying the Mpande area since I was a lighty, this place is my second home.  I have been spearfishing this stretch of coast for as long as I can remember. My first shore dive out to Sharks Point was when I was eleven years old and I speared my first Garrick.

The Kraal is situated on the hill overlooking the beautiful Sinangwana river mouth and beach. The beach stretches for about 900m to end at a seasonal waterfall that flows directly onto the sand.  The beach is lined with Khamanga trees and Milk-woods.  The sand is white and fluffy and the river teeming with life a sanctuary for birds is safe and inviting to swim in.

The Kraal is an assortment of traditional style Xhosa huts as accommodation with spectacular views, a communal dining area, kitchen and pizza oven, clean amenities and hot water as well as a section for camping all surrounded by an authentic kraal fence. The owner’s personality is reflected in every detail from the large mosaicked  whale on the wall to the chickens in the veggie patch.

Dillon recons you will know it is ready when the flesh turns white, don’t flip it over let it cook on one side - Heath Field

I did a quick fillet of a Beautiful Blue fish also referred to as a Bronze bream, took off the skin and handed the beautiful white meat over to Dillon.  He hauled out a cast iron skillet and instead of frying the fish he decided that he would steam the fish and finish it off with a quick flambé.

He heated the skillet poured a thin layer of water into it and then placed the fish in this resulting in a gentle steaming not a broiling. Dillon added a squeeze of lemon harvested from The Kraals organic veggie patch, a dash of Dillon’s choice Himalayan rock salt as it has 85 trace elements, a grind of non-radiated peppercorns. He then let it slowly simmer.

Dillon recons you will know it is ready when the flesh turns white, don’t flip it over let it cook on one side. If the water runs out, top up slightly, however be careful as the idea is not to boil it but steam it.  A soon as the flesh turns white to finish off, drizzle a little olive oil to create a sizzle and to give the fish some colour garnish with peppercorns and serve.

The advantage of this method is that it is far healthier than frying the fish, it’s simple and no need many ingredients. In its simplicity and you taste the integrity of the fish in its all its glory.

Dillon is a master chef and a generous host; I enjoyed the fish, beers and music in the stunning setting at the Kraal with the sea at our feet and the stars as our crown. What a way to start a new year.

Silver sea barbel grow up to 6kgs in the warmer parts of the coast. They are not fussy eaters and feed mainly in the dark or when the water colour turns brown. A paternal mouth brooder, barbel is considered vermin by most anglers and is not often kept to eat due to the poor yield per fish. They are also very slimy and spiky fish making it unpleasant to handle. The barbel have three spikes to protect themselves against predatory fish. If spiked by a barbel the pain is unbearable.

The best way to treat a wound from a barbel is to use hot water to break down the poison. Submerge the area in as hot water as possible without burning the patient or cover the area with a cloth soaked in hot water. If the pain persists, seek medical attention. 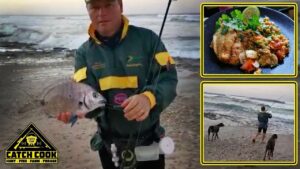 BLACKTAIL ON COUSCOUS Infused with salad and coriander. They one 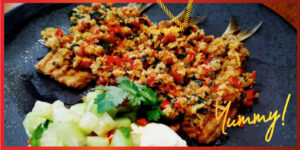 SARDINES RECIPE Topped with a herb and pepperdew crust THE