On my most recent tuna fishing trip to the Cape Canyon, located 20 -30 miles off Cape Point we got some really nice Yellowfin and Longfin tuna…

Along with my mates Chris and Bradley, we landed a few decent Yellows in the 35 – 60kg range and a few Longfin in the 10 – 15 kg range. Here are some tips if you are planning on targeting these illusive pelagic fish in Cape Town waters.

Trolling methods and lures to use:

When trolling, the leader (fluoro/shock) should normally be around 100lb or .90 – 1mm in diameter, this will be more than enough for the abrasion on the tunas teeth. Trolling could be done in many different ways and some people believe that if you are in an area that has some fish that a large figure 8 pattern should deliver some strikes.

I, however, just troll in a straight line sometimes following a contour or sometimes just trying to stay in a certain area and turning around and trying to cover area. The best speed for trolling is generally between 5 and 7 knots and when pulling only conas or squids this could go up to 9 knots or more. The best spread for catching tuna, in my opinion, is having a bird teaser and large white or brown squid in a stand-up rod-holder and putting it between 30m and 50m behind the boat (depending on the weather conditions) and then two deep diving lures (Rapala X-rap 30 or 40, Williamson speedpro 180, Storm or other) put on the outside rodholders and only about 15m behind the boat and two shallow diving lures (Halco laser pro or Gt Jig, Rapala magnum CD 22 or other) put on the inside rodholders about 30m behind the boat. Colours to choose from can vary day to day and according to the weather conditions, but a natural looking colour like a blue or green normally works well as well as pink, gold and white. But on any given day you could get a surprise as when the tuna are feeding wild anything could get picked up. When spinning or jigging for tuna a 50-100lb braid is preferred with a capacity of at least 500m for when you hook a monster, most large stickbaits and poppers or chisselnose lures and spoons or jigs will work when the fish are feeding aggressively.

When seeing other boats drifting in an area where some fish have been caught or hooking up on the troll or seeing feeding fish and bird activity it is advisable to drift and chum for a while to see if there aren’t some tuna around. This method is the ultimate if you want to catch good numbers and larger size tuna. Baiting and chumming could also be done behind trawlers or longliners with good success. When chumming and baiting, always do so by turning the motors into the wind as this will make you drift the best and similar to the other boats. Chumming could be done any way you prefer and depends on the amount of bait you take with, but a continuous slow chum (2 or 3 blocks every 30 seconds) with the odd whole sardine should do it, but when marking fish on the fish finder it often helps to throw some frozen sardines on the surface to bring them up and to witness them feeding on the surface. The preferred tackle is 50 – 80lb rods and lines and even up to 130lb when the fish aren’t shy and a 80 – 130lb fluorocarbon leader of about 1.2 – 1.5m and a strong short shank J hook of between 8/0 and 10/0 (BKK Puka, Bandit/ Landit, Owner Gorilla , other) or a strong sircle hook of 7/0 to 10/0 (BKK Monster sircle, Mustad).

The best baits to use for tuna are sardines, anchovies, mackerel, squid and other shiny fish for longfin and for yellowfin it is almost everything (sardines, hake, mackerel , maasbanker, mullet, tuna sickle , tuna hearts, squid and lots of other baits). When yellowfin are in a feeding frenzy you can even catch them on a banana peel or piece of boerewors. 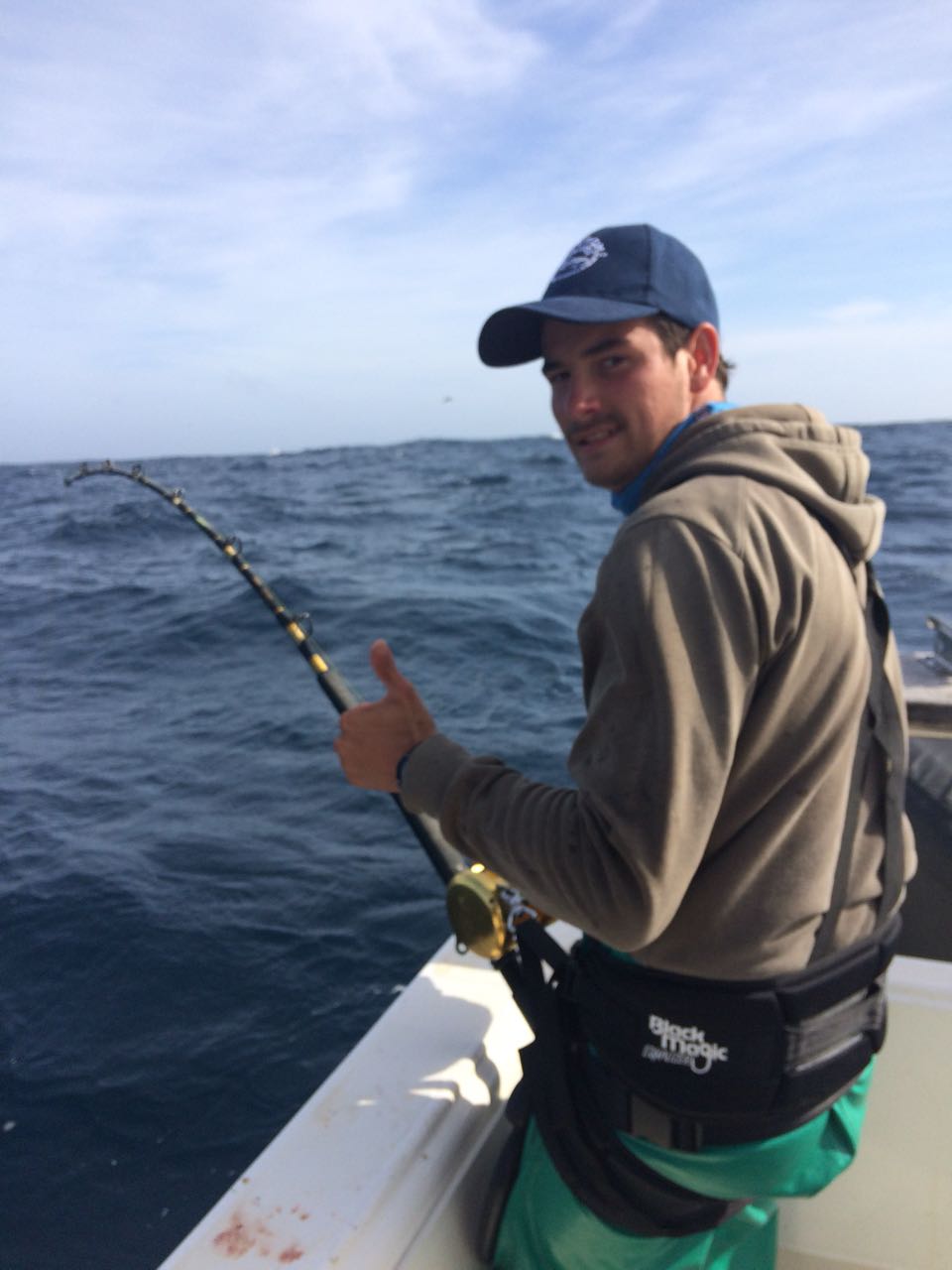 The best indicators to look for when targeting tuna are working birds like Cape gannets bombarding and diving into the water, “Sterretjies” or Terns working and catching baitfish off the surface or bait balls on the surface or on the fish finder. Sudden temperature changes from colder to warmer water could also produce fish and indicates a current line normally and tuna like to hang around this. FADS are also a good starting point as one could encounter anything from yellowtail to dorado to tuna to marlin around this. Clean blue water around 16 – 22 degrees are what we get the tuna in but in the current lines you often get them in more murky water.

Tuna season normally starts in beginning October and can go on as long as there is good clean and warm water around, but this normally ends around the end of May. Tuna feed well in the mornings from sunrise until about 11:00 and in the afternoon from around 14:00 to dark , but some days they will feed the whole day and other days they will feed just in the morning or just in the afternoon.