For someone like Captain Leeu that lives on a sailboat, fishing is a daily routine while sailing from one country to the other.

Almost four years ago, Stefan Heiberg (aka Captain Leeu) decided to go on a trip of a lifetime. He sold all he had and bought a sailboat. With a dream and a heart full of passion he set sail from the Caribbean.

On his recent visit to his home country, South Africa, this world traveller, sailor and social media influencer met up with the Xtreme fishing charters group in Hout Bay for the annual Tuna Derby.

The day starts off early. At 4.30am the adrenalin wakes you up before your clock can shout its annoying tune at you. An alarm clock is something I’m not used to anymore. I rise with the sun and go to bed when my body is worn out after a long day doing boat projects or filming and editing videos for The Paper Boat Project on YouTube.

When we arrived at the Hout Bay harbour the air was filled with the smell of bait fish and strong coffee. A very odd combination but it kickstarted the smiles, good luck pats on the back and the sound of engines filled the harbour as the boats were getting ready for a full day at sea.

"Fish On" I yelled as I hurried for my camera. The guests each had a fish on and the tension on the boat was high. 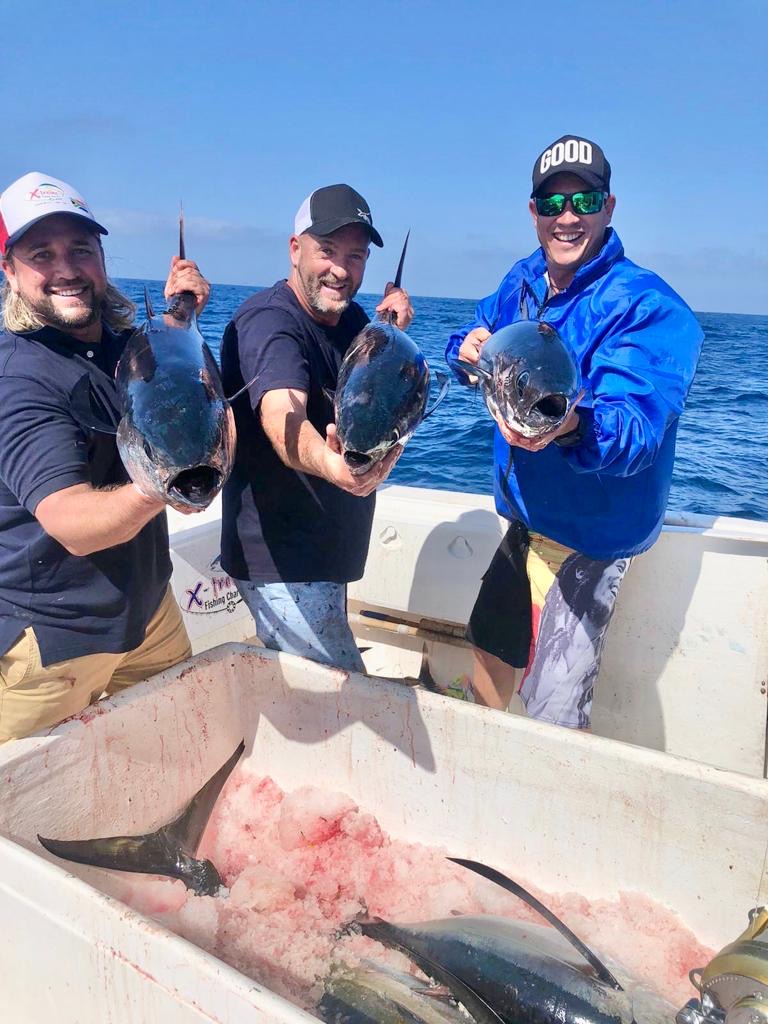 Bosman Swanepoel, marketing manager at Xtreme fishing charters, had become a dear friend of mine and he would also be the skipper on the first and second day of this amazing fishing competition. We left the harbour at around 5.30 with a husband and wife from the Netherlands who had flown in to be a part of this amazing tournament. 30 minutes into the trip and I was getting green gills. “You live on the ocean Captain Leeu,” Bosman snapped at me as I was white in the face trying to not humiliate myself. “the motion of a sailboat vs a powerboat is day and nights difference” I tried to defend myself as I chuckled.

Two and a half hours of driving and we were finally where Bosman thought we should start fishing. Bosman knows these waters and have had many successful days at sea. I remind the guests that it is called fishing and not getting. “We hope that luck is on our side today,” I said. An hour of chumming and fishing and the reels in the cockpit went screaming.

“Fish On” I yelled as I hurried for my camera. The guests each had a fish on and the tension on the boat was high. Clear Instruction were being uttered in support by Bosman. Everyone knew exactly where to be and what to do. It was like an orchestra knowing exactly when to play which tune. Bosman was the conductor. 25 minutes later we had four long fin tunas on ice, and we were smiling, hugging, laughing and handing out high fives. We were in the competition and I started thinking about the cooking videos we will be able to film with this fresh fish…

The couple with their “Good Luck” Caps on hugged each other and I saw a connection between husband and wife that I had never seen fishing create. I was proud and happy for the two of them. Bosman announced on the radio that we were not “mombak” anymore. We had blood on the deck and the day could only get better from here on. 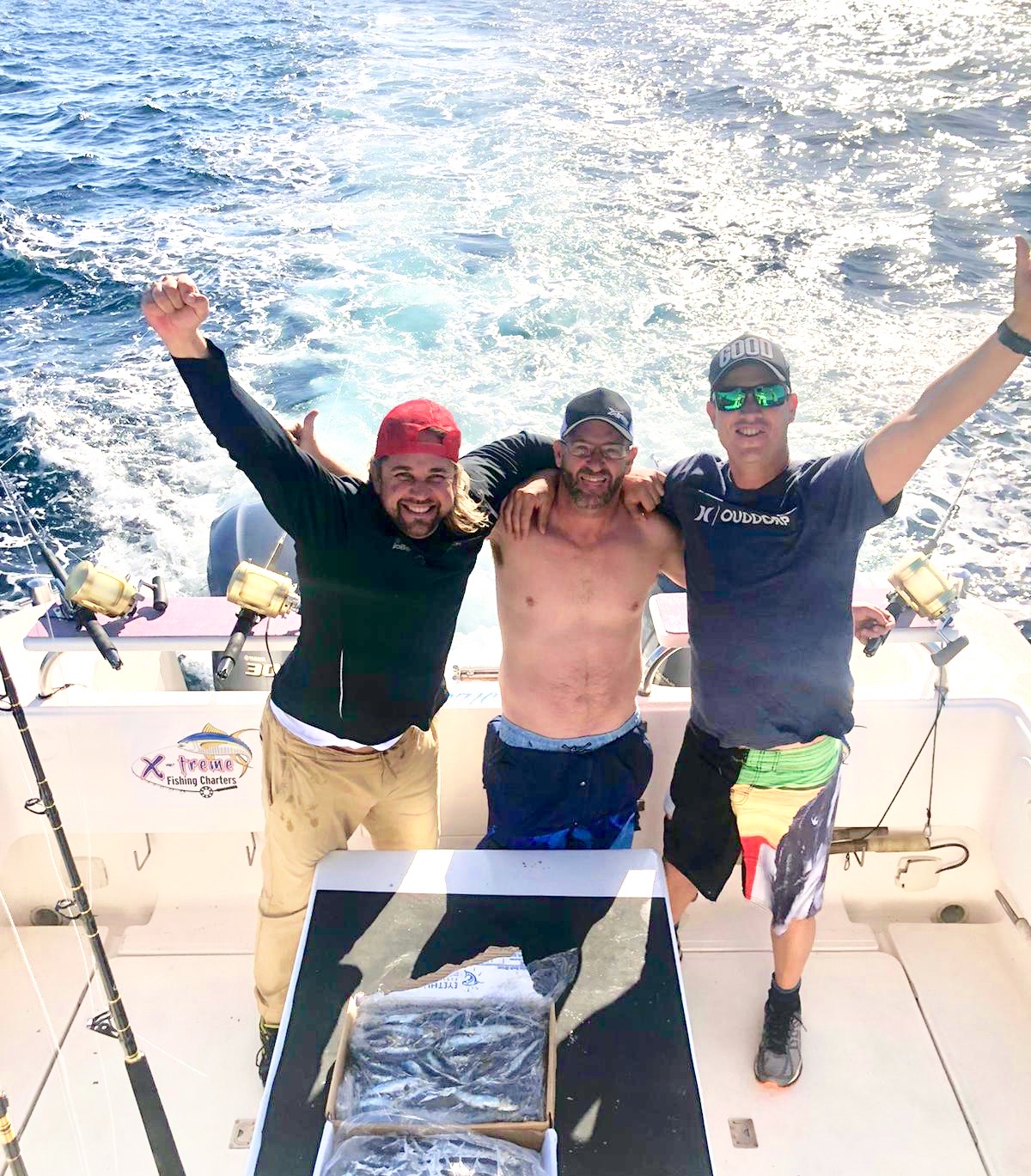 The competition rules require you to submit a long fin tuna of over 15kg and two yellow fins for combined weight. We looked at our catch and were convinced the bigger one of the four would be over 15kg. We would only find out once we got back to shore if we were, in fact, correct.

An amazing day of fishing. We saw dolphin, plenty of sea birds, we caught even more long fin tuna and the smiles grew bigger and bigger. We did not land a yellow fin tuna today, but we had one more day left in the competition I thought, staring at the beautiful blue ocean wondering where the tuna was hiding.

When the announcement to all vessels in the competition was that lines should be up, we all looked at each other and an expression of accomplishment and success was on everyone face. All lines were up, everything packed away, a cold drink to seal the day and off we went back to shore for the weigh in. I clenched my one hand, held my video camera in the other and said small prayers as our long fin tuna was being raised by a crane to be weighed.

15.5 kg and we were in the competition! We were elated! We hugged each other did a small victory dance and proceeded to the upper deck restaurant for a victory drink and celebration.

Fishing can be a solo or team sport. This was a team effort and although I had only met the couple on that day, I knew this day would seal the deal on a lifelong friendship. The other contestants weighed in. It was a tough day on the ocean most said. Some came in with absolutely no fish, some got lucky and landed a big yellow fin tuna or two. As we sat at the restaurant being served tuna steaks that was prepared from our fresh catch, we raised a glass.

With burnt faces, callouses on our hands and tired bodies we just had to give each other one look and the whole days experience flashed in-front of our eyes. “We are in the competition!” Bosman said and we hoped that day two of the competition would be easier on our bodies and boast a bigger catch for the weighing scale.

During day one of the competition we did not only catch beautiful fish but also a new friendship was formed between everyone on the boat that would be very needed for the catch during day two.