The team chosen to represent South Africa consisting of Jacques Malherbe, Cara Cowan, Wimpie
Barnard, Andrew Narainsamy, Brian Mcfarlane, Dino Meneses (Anglers), Riyadh Cassim (Manager)
and Eben Swanepoel (Coach) was selected from the national championships held in 2019 already,
but sadly due to Covid unexpectedly coming on to the scene in March of 2020, but a week and a half
before we were set to fly out to Portugal to compete, the Shore Angling World Championships were
postponed. After a rough ride and a few further postponements finally all lined up for us to go-ahead
this year from 13th to 20th November 2021.

Being my first experience going overseas I was both nervous and excited at the same time. I knew
that my experiences and knowledge gathered here in SA would count for very little fishing the
Mediterranean and wanted to watch and learn all I could from our world-class guides in Josè Alfonso
and Helder Fernandes, both locals and experts in the facet. We decided that as a team we would go
a week earlier in order to get as much practice in before the World Championships
We would be based at the Aqualuz Suite Hotel, Trio, Grandola along with all the other competing
nations and the beaches chosen to fish during the world championships would be Soltroia beach,
Carvalhal Beach, Comporta Beach and Pego Beach, each with their own unique challenges,
formation and species to produce best results.

Touching down in Lisbon International Airport on the 8th of November after many hours of flying and
hearts filled with anticipation, we slowly made our way to the hotel and got to see some of Portugal
first-hand as we drove through the country. We settled in and unpacked at the hotel and got ready
for the next day’s meetings and trace making sessions to prepare us for the World Championships.
After many tireless hours of preparation, we would finally got a taste of the beaches in the coming
days through the training sessions had. Picturesque blue seas, unspoilt sandy white beaches and
perfect sunny weather greeted us. Small neat baits, light lines, precise traces and long casts were the
order of the day going forward and we all had to quickly adapt accordingly in order to be successful,
but under the guidance of our local experts, we adapted fairly quickly and were in good hands. At the
end of the day we weren’t there on holiday or as tourists to take in sights or have a good relaxing
time, but rather to best represent our country and were willing to do what was required to win.
After a mind-blowing opening ceremony parading through the streets of Portugal behind our flag the
seriousness of what lay before started to sink in and nothing can quite prepare you for it. I would
now finally get a taste of what it’s like to compete with the world’s best in Shore Angling. First the
official training day much like an official Championship day, but a lot more casual as all countries
don’t want to show their hand too soon, as the points don’t count toward your final score over the 4
competition days to follow. We managed a 4th overall for the day and were quite satisfied with that.
Now the hard work began. And so the following day the first official competition day rolled on and
the intensity, tempo and work rate tripled as everyone was giving their all for their respective
countries gunning for the gold. Team SA was quickly out the blocks and after the final whistle were
rewarded with top spot on the day for their efforts, closely followed by, France and Spain. 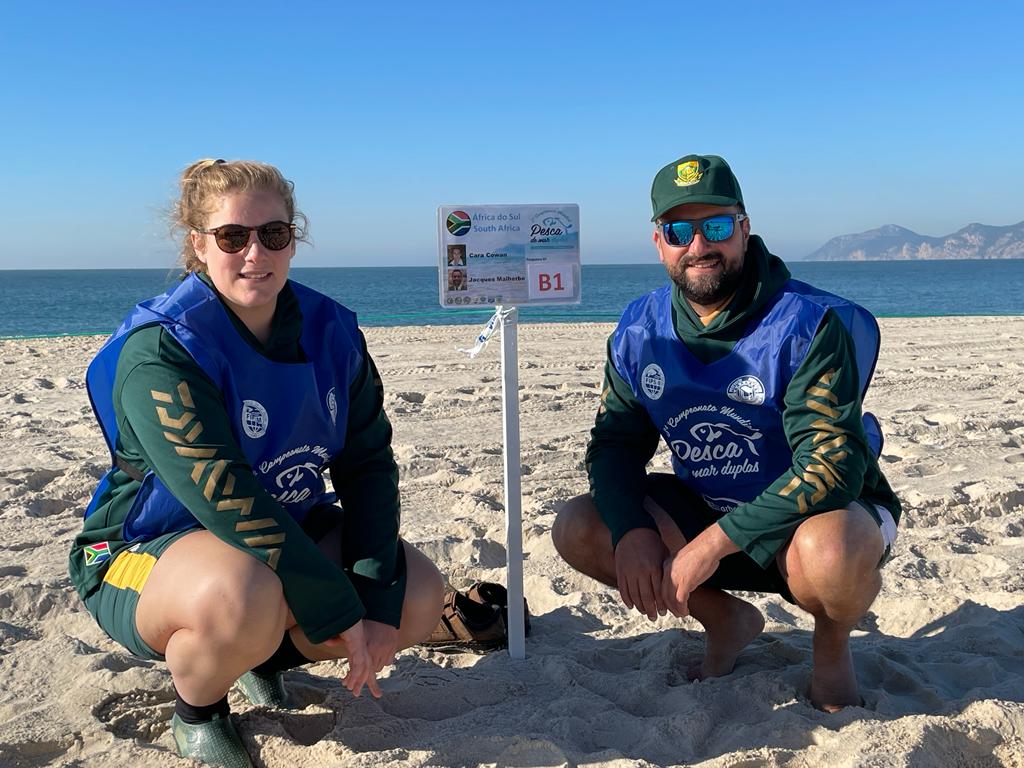 Second competition day we all put in the same efforts, but sadly it wasn’t a great day had by team
SA taking a 5 th position on the day and our lead from being no 1 overall was surrendered to Spain
with SA close on their heels in second overall. With the teams heads dropping a bit after a
disappointing day we quickly needed to pull together and get our heads right in order to turn things
around and fast. With a few stern words and additional teaching and wisdom from our guides we
got our heads right and were ready to finish strong, as only half the work was done.
Third competition day, we had a clear idea of exactly what was required and put it into practice and
after the final hooter of day 3 managed a 3 rd for the day, but unfortunately it was simply not good
enough to hold on to our second position overall as we again surrendered another position on the
overall rankings dropping to third behind France being no 1 and Spain no 2. We are South Africans
and no strangers to overcoming adversity and to make a comeback would be no different.

Final day and as we quietly prepared we knew we needed to give everything we had leaving it all on
the field of battle and we managed to do just that from first cast to last making every second count
overcoming the odds and not only winning the day, but finishing so strong we knocked France into
2nd and Spain into 3 rd overall taking the gold and World Champion status. Not only that but as pairs
Jacques Malherbe/Cara Cowan were winners overall as a pair making them double World
Champions, Andrew Narainsamy/Wimpie Barnard finishing 3 rd overall as a pair taking bronze and
Dino Meneses/Brian Mcfarlane finishing 10th overall. The overwhelming joy at the prize giving of
what we had just achieved was unreal. The feeling indescribable. All the hard work and sacrifices had
paid dividends, but such an achievement could not have been attained were it not for our
management, guides and anglers’ commitment and efforts. It was an honour to be part of something
so special never achieved by a SA Shore Angling team before.

As this is not a professional sport we have to pay out of our own pocket after selection. We are thus
asking should you be willing and able to contribute financially towards our World Champion SA pairs
team who will be participating again in France next year May and needing to pay around R50 000
per angler, please contact me on menesesdino@gmail.com to discuss.